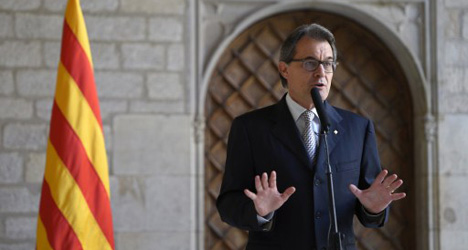 "I as president, in accordance with this law, will call the referendum for November 9th," said Catalan chief Artur Mas. Photo: Lluis Gene/AFP

Mas has repeatedly promised to hold the referendum for the economically powerful northeastern region on that date, despite outright opposition from Madrid.

The Catalan chief said his region would pass legislation in September empowering it to hold the vote.

"I as president, in accordance with this law, will call the referendum for November 9th," Mas said at an event near Barcelona.

On Tuesday, his deputy Joana Ortega had shown a first sign of wavering on the date.

Catalonia could hold the vote at another time if the Spanish Constitutional Court rules its referendum legislation is illegal, said Ortega, the deputy president of the Catalan government.

"If we cannot vote on November 9th there will be another," Ortega, a fellow member of Mas' Convergence and Union alliance, had told Catalan radio Rac1.

"I don't know if it will be February 3rd or what day but the process will live on," she said.

Mas' main political ally in his referendum bid, the fiercely pro-independence Republican Left of Catalonia, criticized her comments as "irresponsible" and political "suicide".

Spanish Prime Minister Mariano Rajoy refuses to countenance a break-up of Spain and his government has warned it would appeal to the Constitutional Court to prevent a referendum.

With an economy roughly the size of Portugal's, Catalonia, a region of 7.5 million — 16 percent of the Spanish population — has long been an economic powerhouse.

Proud of their distinct language and culture, a growing number of Catalans resent the redistribution of their taxes to other parts of Spain and believe the region would be better off on its own.

Support for independence itself was about 45 percent in April, according to the regional government's most recent poll, compared with about 20 percent before Mas took office.