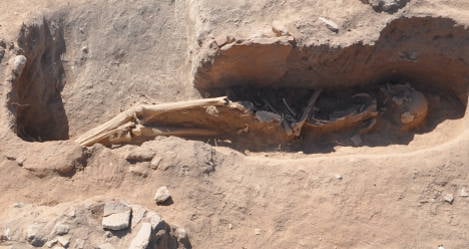 The positioning of the bodies, facing towards Mecca, suggests a Muslim graveyard. Photo: Victor López Menchero

It has only taken two weeks but already excavations at a archaeological site in the Spanish town of Alcázar de San Juan have turned up some exciting finds.

Researchers from the University of Castilla-La Mancha University say they have already unearthed fragments of household goods from the bronze age as well as a Roman inscription and traces of Celtiberian settlements.

The positioning of the bodies — they are all facing towards Mecca — and a lack of accompanying items, both suggest a Muslim graveyard.

For López Menchero, the discovery of an Islamic necropolis is key because it is one of the few pieces of evidence that Muslims lived in Castilla-La Mancha.

Much of Spain was under Islamic rule from the eighth to the thirteenth centuries with the Mezquita of Cordoba and Granada's Alhambra palace being among the most visible symbols of the period.

But little evidence of this civilization has been found in Castilla-La Mancha to date.

But in a statement published by the Alcázar de San Juan town hall the investigator there is "a world to explore".

"We are not talking about a four-year project: to fully understand everything it's going to take one or two hundred years."