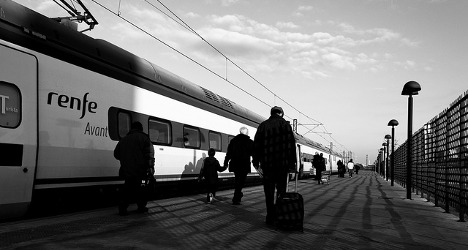 Renfe dropped prices on its Ave tickets in 2013 to boost passenger numbers and make the company more attractive to buyers. Photo: Aaron Groote/Flickr

There were seven million fewer in June 2014 passengers than the same month a year earlier, with figures dropping from 385 million to 378 million.

But not all modes of transport were equally affected by the slump in numbers.

Domestic air traffic was up 4.1 percent on 2013 levels to 2.7 million people, while there was a 7.5 percent jump (to 2.5 million) in the number of people using the country's long-distance trains.

Passenger numbers climbed 25 percent in 2013 in the wake of the move, and more people are now travelling on the country's trains than by planes.

Spain is set to start privatizing train routes as early as 2015, Spanish newspaper El Mundo claimed in May.

After 73 years, Spain’s government railway operator Renfe – which employs 14,000 staff – will began the process of opening up its hugely popular but debt-ridden train system to private competition.

Higher user numbers now should mean a better asking price when it comes to the sale of Spain's rail services.