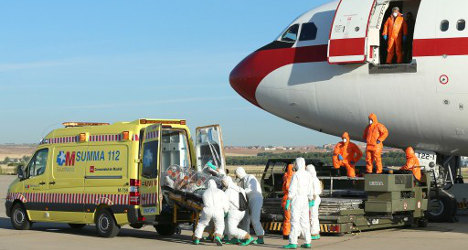 Miguel Pajares, a 75-year-old Spanish priest, has died after failing to respond to treatment with the experimental drug ZMapp at Madrid's Carlos III hospital.

He died at 9.28am on Tuesday morning, a spokesperson with Madrid's health department told The Local.

The drug arrived at the hospital where the 75-year-old missionary was being treated in isolation, the health ministry said in a statement late on Saturday.

Spain's drug safety agency allowed the "exceptional importation" of ZMapp under a law that allows "the use of non-authorized medications in cases where a patent's life is in danger and they can't be treated satisfactorily with an authorized medication," it said.

ZMapp, a treatment made by private US company Mapp Pharmaceuticals, is still in an extremely early phase of development and had only been tested previously on monkeys.

The use of the medication has sparked an ethical controversy as experts call for it to be made available to African nations.

Pajares was repatriated from Liberia and arrived in Madrid on August 7th. The priest had previously been in isolation at the Hospitaller Order of Saint John of God hospital in the Liberian capital of Monrovia.

He came down with Ebola virus after visiting the director of the hospital, who has since died of the disease.