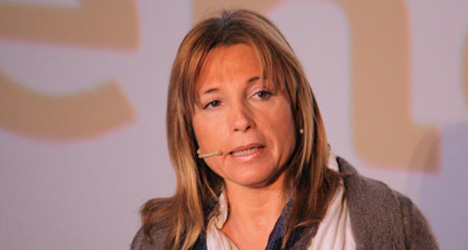 Catalan Vice President Joana Ortega insisted that any delay would not 'kill' the Catalans' desire to vote on their own future. Photo: convergenciaiunio/Wikipedia

Speaking to Catalan radio station RAC1 on Tuesday, Catalan Vice President Joana Ortega underlined that the independence referendum process should be completely legal in order to be "flawless" and left the door open to a possible postponement if the Spanish government takes the matter to the country's Constitutional Court.

Her comments come in the wake of a recent meeting between Spanish Prime Minister Mariano Rajoy and Catalan President Artur Mas — a sit-down seen by many as an attempt to break the deadlock over the thorniest issue in Spanish politics.

Mas and his government are pushing for a vote on the issue of independence from the rest of Spain, while the central government in Madrid has labelled any such move illegal.

The leaders of the two camps walked away from their recent meeting without giving ground.

But Tuesday's comments from Mas' second-in-charge suggest the Catalan government may be prepared to be flexible — at least on dates.

"I'm working towards November 9th, and if not, there will be another November 9th, " said Ortega, according to Catalan daily La Vanguardia.

"I can't say if it will be the 31st of February but an appeal doesn't kill it at all – the independence process – postponement, it doesn't kill the Catalan's desire to vote. The longing remains alive," she added.

It is the first time that a senior Catalan politician has publicly expressed the possibility of  a postponement of the controversial vote.

The region, which has its own language and distinctive culture, blends a powerful financial services sector with a strong industrial base ranging from textiles and automobile manufacturing to biotechnology.

The new leader of Spain's opposition Socialist Party has called for a federalist solution to the thorny issue and two-thirds of Spaniards think that the Spanish prime minister Mariano Rajoy should drop his hardline stance and negotiate a constitutional solution.

In her interview on Tuesday, Ortega criticized the Spanish government for turning a "political" process into a game of judicial hot potatoes and emphasized that the Catalan regional government was acting "transparently, cleanly and rigorously" and seeking dialogue with Madrid to agree a way to carry out the referendum.

"The government acts in a hardheaded manner; you meet a wall you bounce off which prevents any kind of negotiation," she complained.