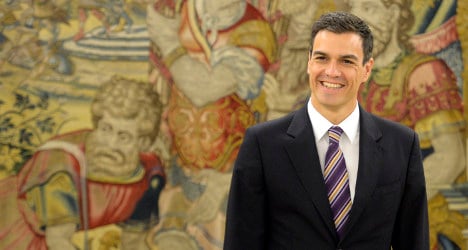 The Popular Party have 32.3 percent support while the Socialists have 31.7 percent, the Metroscopia poll published in Spain's centre-left El País newspaper revealed.

Just over one in two people polled (54 percent) said the election of Sánchez was good for the party, while that figure was 81 percent among PSOE voters.

Thirty-one percent said the vote would make the struggling party, which took a hammering in May European elections, more united. For PSOE voters, the figures was 49 percent.

The poll also showed that a new Spanish leftist party which grew out of grass-roots protests against economic inequality and austerity is the third most popular choice among voters.

Podemos, which means "We Can" in Spanish, would garner 10.7 percent of the vote in parliament if elections were held today, according to the Metroscopia poll.

Podemos stormed past older opposition groups to take fourth place in Spain's EU elections in May, winning 8.0 percent of the vote and five seats in the European Parliament, despite having been officially formed just four months earlier.

The party, led by pony-tailed professor Pablo Iglesias, backs a guaranteed minimum income and lowering the retirement age to 60 and eliminating tax havens.

Just over half of all Spaniards, 54 percent, feel the party "offers real change in contrast to other parties" but only 31 percent believe its programme is "realistic and could be put in place", according to the poll.

The results for Podemos in the Metroscopia poll are lower than those gained by the party in the recent government CIS poll which showed voter support for Podemos running at 15.3 percent.

The CIS poll put voter support for the PSOE at just 21.2 percent, or more than 10 percent below the party's result in the Metroscopia survey.

However, the CIS poll was conducted from July 1st to July 9th, or before the Socialists elected their new leader.

Spain is slated to hold general elections in 2015.