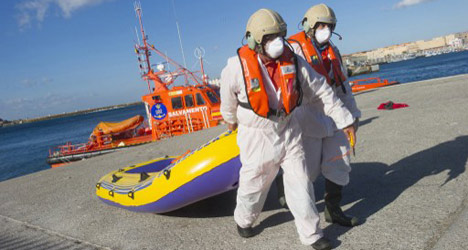 Rescue workers are regularly called upon to aid the thousands of migrants who use rafts and inflatable dinghies to try to reach Spain each year. Photo: Marcos Moreno/AFP

The migrants were picked up in the Strait of Gibraltar and taken to Tarifa, Spain's southernmost port, a spokeswoman for the coastguard told news agency AFP.

"They are apparently all in good health," she said.

Over the weekend, Spanish rescue services picked up another 68 African migrants who were trying to reach Spain in several other boats.

Thousands of undocumented migrants from Africa try to cross the 15-kilometre (nine-mile) strait from Morocco to Spain on makeshift boats and inflatable dinghies each year.

Thousands of migrants also try to enter Spanish soil overland by scaling the border fences that surround Ceuta and Melilla, two Spanish territories that share a border with Morocco and that have the European Union's only land borders with Africa.