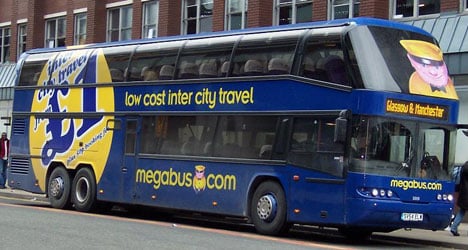 Coach operator Megabus has stated that it will be raising concerns with Spanish authorities over the police's handling of the incident. Photo: Radamfi/Wikipedia

A routine road trip turned into an overnight ordeal for passengers of a coach owned by Megabus travelling from London to Barcelona via France.

Catalonia's regional police force, the Mossos d'Esquadra, reported that they had stopped the vehicle for a routine check at Maçanet de la Selva near Girona on the AP-7 motorway which runs along Spain's Mediterranean coast.

Police said that the British driver was found to have falsified travel documents required to carry passengers and was duly arrested.

But Megabus denied this version of events and told The Local: "Our driver had the correct documentation and identification for his journey and was well within his legal driving hours . There appears to have been a technical issue with the way the journey was being recorded."

The passengers were left stranded at a service station after police allegedly blocked their access to alternative transport.

"We arranged for replacement vehicles to allow customers to continue their journeys, supplied by a Spanish coach operator. However we are concerned that local Spanish police prevented passengers from using these vehicles, resulting in a significant and unnecessary delay to their journey," said Megabus in an official statement.

After being denied access to transport, the passengers were forced to find their own accommodation for the night, which Megabus has agreed to pay for.

"Our team kept in touch with passengers by email throughout the night and attempted to find accommodation for them which unfortunately was not possible.

We advised that we would cover all costs for passengers who made their own arrangements for onward travel. We will also be issuing a full refund and providing complimentary return travel for all customers affected," said the company.

"We will be raising concerns with the appropriate authorities in Spain about how this situation was handled and the impact on our customers using this service," they added.

Megabus offers a limited number of seats on the service for as little as €2 ($2.68) with the rest being priced according to demand.

Their coaches are larger than usual, carrying 72 instead of 50 passengers, and the company is part of the Stagecoach Group which operates across the UK, Europe and North America.