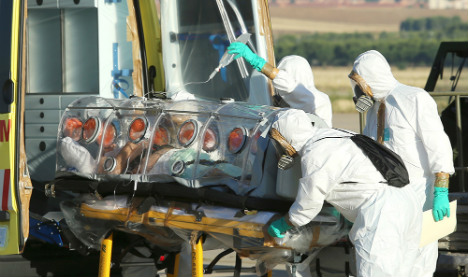 The drug called ZMapp arrived at Madrid's La Paz-Carlos III hospital where the 75-year-old missionary was being treated in isolation, the health ministry said in a statement late on Saturday.

Spain's drug safety agency allowed the "exceptional importation" of ZMapp under a law that allows "the use of non-authorised medications in cases where a patent's life is in danger and they can't be treated satisfactorily with an authorised medication," it said.

The Roman Catholic priest, Miguel Pajares, was one of three people who tested positive for Ebola at the Saint Joseph Hospital in the Liberian capital Monrovia where he worked.

He was brought back to Spain on Thursday on a medically equipped Spanish airforce plane, the first patient in the fast-spreading Ebola outbreak to be evacuated to Europe for treatment.

Spanish health authorities said Thursday the priest was in a stable condition. The hospital is not providing medical updates for the missionary at his request.

The military flight also evacuated Spanish nun Juliana Bonoha Bohe, 65, who worked at the same hospital as Pajares in Liberia and who was found not to have Ebola.

The Spanish charity Pajares worked for, the Hospitaller Brothers of St. John of God, had asked Madrid to bring to Spain for treatment two African missionaries infected with Ebola who also worked at the hospital but the request was turned down.

One of those two missionaries, a Congolese nun, died on Saturday due to Ebola, the charity said.

There is no proven treatment or cure for Ebola, which causes severe fever and, in the worst cases, unstoppable bleeding. Some 55 percent of cases in this outbreak have been fatal.

Two Americans infected with Ebola while treating patients in Liberia have shown signs of improvement since being given Zmapp back in the United States but health authorities say it is too early to tell if the drug had anything to do with that.

ZMapp, a treatment made by private US company Mapp Pharmaceuticals, is still in an extremely early phase of development and had only been tested previously on monkeys.

The use of the medication has sparked an ethical controversy as experts call for it to be made available to African nations.