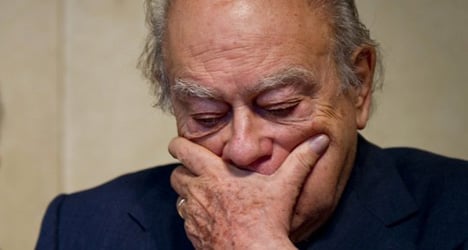 The former president and political powerbroker has been accused of harbouring up to €1.8 billion in undeclared offshore funds. Photo: JOSEP LAGO / AFP

Pujol, 84, was handed the official notification on Friday morning in the Pyrenean property belonging to the family of his wife, Marta Ferrusola.

"It's from the tax agency; I have nothing else to say," he told gathered reporters, before responding that "of course" it was a demand to declare.

The premier of Spain's Catalonia region from 1980 to 2003 said in a statement two weeks ago that his father had accumulated an undisclosed amount of money which he stored outside of Spain.

He admitted that after inheriting the money it had remained undeclared for over 30 years.

Catalan daily newspaper La Vanguardia reported that €4 million euros ($5.4 million) was kept in a bank account in the principality of Andorra, a tiny landlocked nation wedged between France and Spain which has a reputation as a tax haven.

Spanish daily El Mundo reported on Sunday that authorities believed that the Pujol family could have as much as €1.8 billion in undeclared accounts in Europe, America and Asia.

Pujol has not confirmed any specific figures but noted this week that he was "at the disposition of the authorities."

When initially admitting the undeclared funds, Pujol announced that he would abandon politics and "give up everything".

Current Generalitat president Artur Mas said that Pujol would also lose his pension, office, official car and chauffeur, as well as his position as founding chairman of the nationalist Convergence party, the largest force in Catalonia's ruling Convergence and Union alliance.