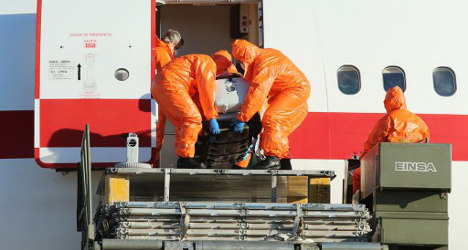 Miguel Pajares, a 75-year-old priest, arrived back in Spain on Thursday morning in a specially-equipped military aircraft.

The missionary was then transferred immediately to Madrid's Carlos III hospital, and was reported to be in a stable condition on Thursday afternoon.

The decision to bring the priest back to Spain was announced by Spain's health authorities on Tuesday after a brief burst of intense negotiations.

The risk of contagion was "very low" the health ministry said.

But medical groups have criticized the "improvised" and "rushed" preparations for Pajares's arrival, saying facilities weren't ready and staff are unprepared.

"Even the choice of which hospital to use was a problem," Amelia Batanero with Madrid's Independent Health Workers Union (AME) told The Local.

"Initially, the health ministry was looking at Madrid's La Paz hospital where a couple of false-positive Ebola results were seen earlier this year. Instead they chose the smaller Carlos III hospital, where it is easier to isolate someone, and which has quarantine facilities."

But, as Batanero explained, there was a stumbling block.  The ministry actually began stripping facilities from Carlos III last year, with many patients being sent across to La Paz. The hospital is also short of staff.

"It's not the hospital it used to be," said the spokesperson for the union which has grown out of opposition to cuts to Spain's health sector as part of the government's austerity drive.

Carlos III is "just dust at the moment", a spokesperson with the CSI-F union told Spain's El Mundo newspaper on Wednesday.

"They are busy cleaning the [previously closed] floor where the negative pressure isolation chambers [for people with infectious diseases] are." .

Of more concern to AME's Batanero, however, is the lack of staff training when it comes to Ebola.

"Spain is ready to deal with Ebola cases. The protocols are in place, and treatment [which involves preventing fluid loss and bleeding, as well as pain management] is relatively straightforward," she said

"But hospital staff are not adequately trained to deal with Ebola — partly because of cuts to Spain's health system. In fact, they are being given accelerated courses right now.

"All it takes is one health worker or a cleaner to make a mistake with the isolation protocols and you have a public health problem."

To make matters worse, because the Carlos III hospital is actually short-staffed, doctors and nurses from La Paz hospital will also be doing shifts at the hospital.

"This means there is always a risk, however small, that they will expose healthy patients at La Paz to the Ebola virus," said Batanero.

On Wednesday, Daniel Bernabéu, president of Madrid's Amyts medical association said the decision to bring Pajares back to Spain was "political" and not based on health reasons.

Available resources should have been used to treat the priest in Liberia, he argued.

"That's a matter of personal opinion. Pajares also said he wanted to return to Spain, so there is also a moral issue involved. But you could argue that, yes, bringing him back to Spain was an error."

Pajares, who spent five decades in Liberia as a missionary, was confirmed as having the Ebola virus on Tuesday.

He came down with the virus after visiting the director of the Hospitaller Order of Saint John of God hospital, who has since died of the deadly disease which has a mortality rate of 50 to 90 percent.

The current Ebola outbreak has claimed at least 900 lives with over 1,700 people infected across west Africa, according to World Health Organization figures.