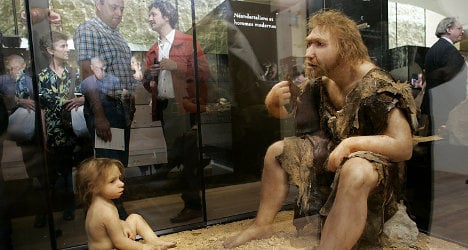 ”These discoveries bring the Neanderthals closer to us,” says Clive Finlayson, Director of the Gibraltar Museum. Photo: Patrick Bernard/AFP

”These discoveries bring the Neanderthals closer to us,” Clive Finlayson, Director of the Gibraltar Museum, told The Local about his ground-breaking results.

“For a long time, Neanderthals were considered inferior to humans for not having the mental ability to catch difficult prey.

"We now know that not only were they doing it long before our own ancestors, but also that it wasn’t a one-off.”

Over the past year and a half, Finlayson's archaeological research in Gibraltar has been focused on more than 1,724 rock dove bones which date back between 28 million and 67 million years.

“We had to determine who brought them to Gorham’s Cave: Neanderthals or animals?” Finlayson told The Local about what his team found at the famous Neanderthal site.

They soon started getting encouraging results from lab work: 48 bones revealed tooth and cut marks, while a series of colour changes across the bones proved that the birds had been grilled on open fires.

“We had found some interesting evidence before, but this one enters the top three of the most important discoveries in Gibraltar," said Finlayson, adding that it also constitutes an important achievement worldwide.

Gibraltar researchers will now build on these results by conducting similar studies on other bird and animal remains.

Finlayson now hopes to find out more about Neanderthals' homes, such as where the campfire, or kitchen, was located.