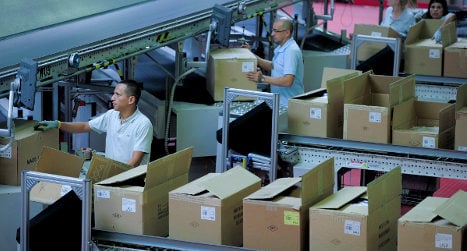 Factories boosted output of consumer goods by 1.4 percent in the year to June, the latest report showed. Photo: Josep Lago/AFP

Spanish industry pushed up output by 0.8 percent in June from a year earlier, after correcting to smooth out seasonal variations, the National Statistics Institute said.

Spain's economy, the fourth-largest in the eurozone, grew in the second quarter of 2014 at a faster-than-expected quarterly rate of 0.6 percent, raising hopes for the outlook after it emerged from a two-year recession in mid-2013.

The unemployment rate dipped below 25.0 percent in the April-June period but still remains painfully high at 24.47 percent, likely capping any recovery in domestic demand.

Factories boosted output of consumer goods by 1.4 percent in the year to June, the latest report showed.

Production of business equipment, such as machinery, fell by 2.6 percent.But output of intermediate goods used in manufacturing, such as chemicals,climbed 2.0 percent.

Some economists who follow closely the eurozone countries which got into deep trouble, say that Spain is showing signs of a big improvement in underlying competitiveness and in terms of growth could even outperform other countries in the single-currency area, and notably its big neighbour France.