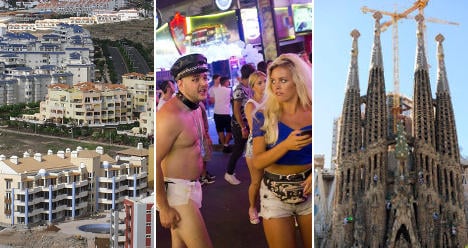 Can you guess where these three Spanish 'no-go zones' are? Photo: Mataparda/Flickr, Jaime Reina/AFP, Josep Lago/AFP

Spain is the third most popular tourism destination in the world, which shouldn't come as a surprise to anyone.

You can barely walk five minutes in Spain without tripping over some amazing sight or other.

From Roman aqueducts to space age opera houses, there is more than enough to fill several lifetimes worth of weekend getaways.

But nowhere is perfect, sadly — not even Spain.

Whether it's overpriced historical monuments or beach towns where you can barely see the ocean for the skyscrapers, the country has more than its fair share of places that tourism has turned into torture.

In this light-hearted gallery of tourist traps to avoid, The Local rounds up the worst that Spanish tourism has to offer.