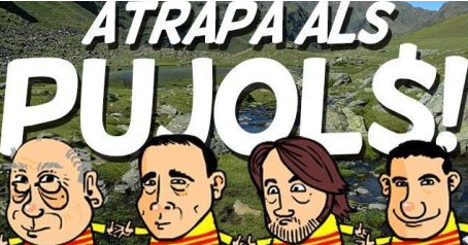 Gamers move up a level when they manage to put all the caricatured Pujols in a cage, stopping them from stealing any more taxpayers’ money. Photo: Events-QR

Just days after the former president of Spain's Catalonia region Jordi Pujol shocked Spain with news that he and his family hid millions of undeclared euros in offshore accounts, developers in Barcelona have launched a new game app allowing users to put the clan behind bars.

'Pujol Gate, as developers have named the game, involves catching out Pujol, his sons and his lawyer as they try to stash their undeclared cash in Andorra, Malta, Liechtenstein, Ireland and the Cayman Islands.

Gamers move up a level when they manage to put all the caricatured Pujols in a cage, stopping them from stealing any more taxpayers' money.

Events-QR designer Roger Giménez told the Spanish edition of the Huffington Post that he came up with the idea for 'Pujol Gate' while developing a "rabbit-catching game".

"The scandal broke" on July 25th and the app design team from Catalonia changed their app design slightly, making it a satirical game that allows users to take a lighter approach to a serious subject.

Pujol is a leading advocate of Catalonia's independence from Spain, and his admission that he hid money in offshore accounts for over three decades has undermined the secession movement currently being led by regional President Artur Mas.

Pujol has now been stripped of his pension, office, official car and chauffeur.

Spanish media sources have put the Pujol family fortune at an estimated €1.8 billion, which would make them the seventh wealthiest family in Spain.