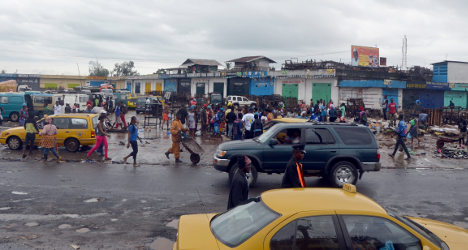 People in the closed Red Light market in Monrovia where offices and shops were closed as part of a disinfection campaign against the epidemic of the haemorrhagic fever Ebola on August 1st. Photo: Zoom

Miguel Pajares will be repatriated in an army Airbus A310 with a medical team on hand, Spain's El País reported.

The aircraft was expected to take off from Spain's Torrejón airbase at 5am on Wednesday morning, but is now expected to depart at midday.

Want the latest news on this story? Read the update here.

Pajares will be treated at Madrid's La Paz hospital on his return to Spain, El Mundo newspaper reported.

The priest, currently in isolation at the Hospitaller Order of Saint John of God hospital in the Liberian capital of Monrovia, was confirmed as having the Ebola virus on Tuesday.

The priest came down with Ebola virus after visiting the director of the Hospitaller Order of Saint John of God hospital, who has since died of the disease.

He has been described as "very weak" and in very poor spirits, by Spanish media outlets.

The US is stepping up efforts to fight an outbreak which has claimed more than 800 lives on the continent and which has a mortality rate of 50 to 90 percent.

A presidential aide in Sierra Leone told news agency AFP the soldiers would "deter relatives and friends of Ebola patients from forcefully taking them from hospitals without medical consent".