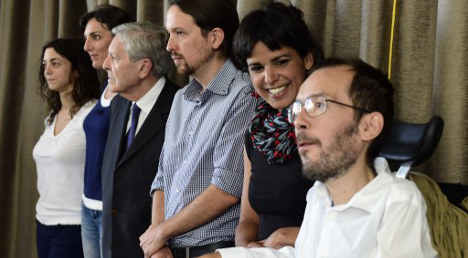 Podemos leader Pablo Iglesias (centre) has been key in raising the profile of his grassroots party with his regular TV debate appearances. Photo: Gerard Julien/AFP

Until recently, few people in Spain had heard of the eight-month-old anti-austerity party known as Podemos.

But the left-wing group headed up by television chat show regular Pablo Iglesias jumped to prominence after its strong showing in May's European elections, when it won five seats and came third overall behind Spain's two largest parties — the ruling Popular Party and the main opposition party, the socialist PSOE.

It now appears that early burst of popularity was not a flash in the pan.

The latest monthly poll by Government research body CIS has 15.3 percent of people surveyed saying they would vote for the controversial ‘new-party-on-the-block’ in the general elections in Spain scheduled for the end of the 2015.

This means Podemos have shot past Spain’s traditional third power, the United Left (IU), which has 8.2 percent of voter support, according to the CIS poll.

The country’s ruling conservative Popular Party continues in the lead with 30 percent of the votes followed by the struggling Socialists with 21.2 percent, who suffered at the hands of Podemos in the European Elections and have been pinning their hopes of revival on their new leader Pedro Sánchez.

Spain’s two-party system remains afloat but as the Spanish edition of the Huffington Post points out, “they continue to lose support barometer by barometer”.

“The health system is the third biggest problem for Spaniards after unemployment and the economy,” said Podemos politician Carolina Bescansa.

“It proves how austerity cuts are influencing and harming Spanish society.”

Podemos’s main campaign goals include the scrapping of Spain’s labour and austerity reforms as well as numerous other drastic policies which many Spaniards consider necessary but the ruling PP label radical or communist.

The Socialists (PSOE) meanwhile have argued that the poll’s results are outdated as they were carried out before they overhauled the party with their new leader Pedro Sánchez now steering the ship.