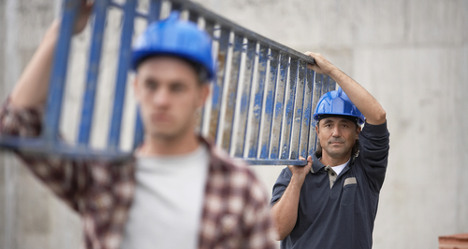 When corrected to smooth out seasonal blips, the number of registered unemployed rose by 32,357 people in July. Photo of construction workers: Shuttersto

Unemployment dipped by 29,841 in July, leaving the number of people registered as looking for work in the country's employment offices below the 4.42 million-mark seen when the current conservative Spanish government took office in December 2012.

July's figure is the latest in a series of strong numbers for the government after more than 120,000 people left the jobless queues in June.

However, the new is not all good.

Spain's active population — the number of people either working or looking for work —  fell from 23.4 million at the end of 2011 to 22.9 million in the second quarter of 2014, according to Spain's statistics institute, the INE.

This means that some of people who have left Spain's jobless queues have either given up seeking work, or have seen their benefits run out.

In addition, when corrected to smooth out seasonal blips, the number of registered unemployed actually rose by 32,357 people in July.

Spain's economy relies heavily on tourism and the labour market usually enjoys a boost in hiring during the summer months.

Spain's unemployment rate slipped below 25 percent in the second quarter of this year, a separate report showed last month, as the economy enjoyed a gradual recovery after emerging in mid-2013 from a two-year recession.