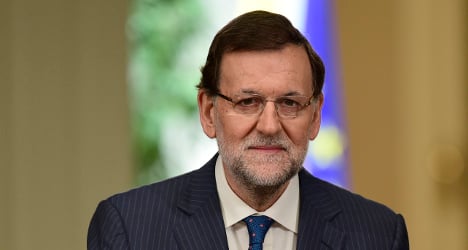 The Spanish economy is recovering "better than expected" and is now among Europe's best performers although it still faces "numerous" problems, Prime Minister Mariano Rajoy conceded in Friday's face-to-face with the press.

"Things are going better than we expected. We are registering healthy and diversified growth which is here to stay," he said in his annual end-of-term press conference, where the economy took centre stage and the Catalonia issue only came up in the context of questions from journalists.

A year to the day after Rajoy was forced to defend himself in parliament against claims he knew about a slush fund allegedly operated by former party treasurer Luis Barcenas, Rajoy again avoided the issue of corruption.

The prime minister chose not to speak about cases involving former members of Rajoy's ruling Popular Party in a speech described by new Socialist opposition leader Pedro Sanchéz as "triumphalist and "self-complacent".

"In less than two years we have gone from being an economy on the brink of a bailout to being one of the economies that grows the most in Europe," Rajoy said.

"We are going in the right direction, but we are conscious that there is still much to do and the problems that we must tackle are still numerous."

Economy Minister Luis de Guindos said on Tuesday the government planned to raise its 2014 and 2015 economic projections in September after stronger-than-expected performance over the last six months.

He said the forecasts are likely to be raised to an expansion of 1.5 percent this year, up from a previous estimate of 1.2 percent, and possibly 2.0 percent next year, up from 1.8 percent.

In 2008 a Spanish property clash plunged the eurozone's fourth-biggest economy into five years of economic and financial turmoil.

Spain faced pressure to seek a full financial bailout from the eurozone in 2012. In the end it got by with €41 billion euros ($55 billion) to rescue its banks.

The Spanish economy expanded by a better-than-expected 0.6 percent, up from growth of 0.4 percent in the first quarter with the government crediting its reforms to the banking system and labour market for the stronger growth.

But unemployment, while starting to fall, remains sky-high.

The latest unemployment data showed the jobless rate edged below 25.0 percent in April-June for the first time since the third quarter of 2012. But at 24.47 percent, it remains one of the highest in the industrialized world.

The issue of Catalonia's planned November 9th vote on the issue of independence came up on Friday only during the question time that followed Rajoy's summary of events of recent months.

"The prime minister is obliged to comply with the law," and the vote is illegal," said Rajoy of his meeting earlier this week with Catalan leader Artur Mas.

"My position is the law, but I will enter into dialogue as well.

"I don't know what will happen on November 9th. But I know that Mr Mas has said he won't do anything illegal. I hope that is the case."

Artur Mas, who has headed the Catalan government since 2010, has called for a November 9th referendum to test popular support in the region for the idea of independence from the rest of Spain.

However, Mas insisted on Wednesday he wanted the vote to go ahead.

"I told him that we are absolutely determined, as I told him a year ago, to hold the consultation," Mas said.

"We have the determination and the political strength, but we would like to hold (the vote) in a legal manner and with the backing of the State, British-style," he said, in reference to an upcoming vote in the UK on the issue of independence for Scotland.

"This is still not possible yet but we will keep trying. We don't have an agreement but the climate of dialogue is now open," the Catalan leader added.

Support for independence itself was about 45 percent in April, according to the regional government's most recent poll. That compares with about 20 percent in October 2010 before Mas took office.