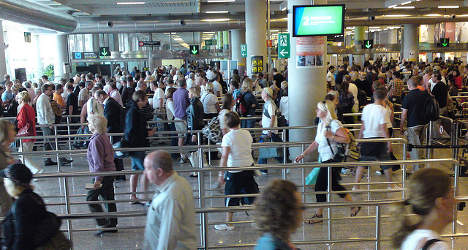 The body of 61-year-old René Becker lay unnoticed on a bench outside the departure lounge of the airport for several hours, local daily Diario de Mallorca reported on Friday.

The man known locally as 'El Barbas' ('Mr Beard') had been living outside the airport for seven years, surrounded by his few possessions.

Early on Thursday morning, however, airport staff noticed that he seemed to be sleeping more deeply than usual.

When they approached, they found he didn't have a pulse and that his body was already cold. A coroner later determined he had been dead for at least six hours.

In that time, thousands of passengers bound for destinations as diverse as Italy's Palermo and the northern English city of Doncaster has traipsed past his body.

Becker, a former engineer who left Germany after divorcing his wife, was a minor celebrity on Majorca.

Described as "friendly" and "affable", he had even made several appearances in Germany's tabloid press, according to local German-language daily Mallorca Zeitung.

One article shone the spotlight on his brief reunion with his daughter Patricia.

In 2011, Patricia flew out to Majorca in an effort to bring her father home but he rejected her offer, deciding instead to stay put in his new 'home'.