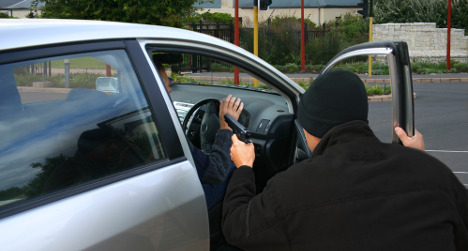 Rather than flee the scene, the kidnappers forced the woman to drive them to her home.Photo of kidnap :Shutterstock

The woman was driving through Seville when the three suspects got into her vehicle and put a balaclava over her head.

Moments after, she heard one of them cry out: “You’ve got the wrong registration plate, this isn’t the girl.”

Rather than flee the scene, the kidnappers forced the woman to drive them to her home.

There they stole two of her mobile phones and €250 ($335) in cash before escaping in the woman’s car.

The victim immediately contacted Spain’s National Police force, who deployed a unit specializing in kidnappings and extortions to find the three men.

Officers were able to locate the suspects, recover the stolen belongings and break up the drug ring they were operating, Spanish daily 20 minutos reported.