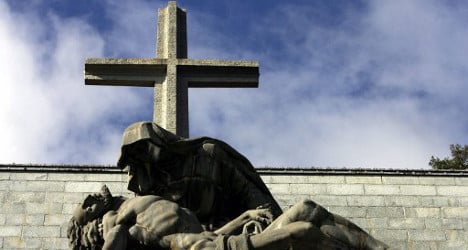 The entry to the basilica in the Valle de los Caídos (The Valley of the Fallen) where former Spanish dictator Francisco Franco is buried. Photo: Philippe Demazes/AFP

Franco, who ruled Spain from the end of the country's Civil War in 1939 until his death in 1975, is buried in the grand Valley of the Fallen war memorial near Madrid.

The imposing monument was originally intended to a memorial to be the dead on both sides of a bloody conflict which pitted friends against friends and even family members against their own relatives.

But with Franco now buried in the basilica on the Valley of the Fallen site, the monument has become a place of pilgrimage for Spain's right wing.

Opponents of the vast complex also point out the members of Spain's defeated left-wing opposition to Franco died during the memorial's construction.

Now the United Nations is repeating calls made in 2011 by Spain's former socialist government for Franco's body to moved from the Valley of the Fallen — a call that has been firmly rejected by members of the Francisco Franco Federation.

The UN also would like to see the site turned into a museum honoring the victims of the dictatorship, as part of a general move by Spain to remove all symbols of fascist oppression.

The proposal is one of a series of tough recommendations from the United Nations Working Group on Enforced on Involuntary Disappearances, Spain's El País newspaper reported on Thursday.

In a new report based on investigations during a 2013 trip to Spain, the group have given Spain 90 days to draw up a "comprehensive" and "coherent" road map on how it plans to help victims of the Franco era and their families.

The UN says Spain must set up and fund a national search plan to find the bodies of the estimated 100,000 missing victims of the Civil War and of the Franco era, a search hampered by serious budget cuts under the government of Spain's ruling conservative Popular Party.

The UN working group has also called on the country to set up a truth commission "to determine" the truth behind human rights violations during the Civil War and the dictatorship".

After Franco's death in 1975, the country's major political parties agreed to a 'pact of forgetting' while a 1977 amnesty law prevents victims of Franco-era crimes from prosecuting suspected perpetrators.

It also made provisions for the removal of all Franco era symbols from public buildings and spaces, and for the use of state money in the hunt for the graves of missing victims.

The United Nations in February said Spain should scrap a 1977 amnesty law that stops victims of Franco-era crimes from prosecuting the alleged perpetrators of such atrocities.