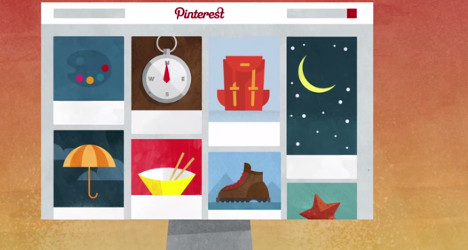 Icebergs services will be discontinued on the first of September, and the startup's founders will go to work for Pinterest. Screen grab: Pininterest/YouTube

The acquisition was aimed at beefing up Pinterest's team, particularly with Icebergs co-founders Cesar Isern and Albert Pereta.

“For years, Cesar and Albert have been building technology to improve online visual curation and organization of projects, and we're excited for them to join us,” Pinterest said in an email to news agency AFP.

Icebergs services will be discontinued on the first of September, and the startup's founders will come here to work for Pinterest.

“We are thrilled to be joining forces with the talented Pinterest team in San Francisco, a perfect home for our experience in product and design,” Icebergs said in a post at its website.

“We can't wait to use what we've learned building Icebergs to help make their experience even better.”

Icebergs was founded in Barcelona last year and set out to provide private space in the Internet “cloud” for people to organize, save, and collaborate on projects involving images, video and other digital content.

The startup did not reveal the number of users, but said in a farewell message that it was trusted by “hundreds of thousands of creative minds” around the world.

The companies did not disclose financial terms of the deal. The Icebergs buy is the fifth acquisition by Pinterest.

Pinterest in May confirmed that another $200 million has been pumped into its coffers to build up search capabilities at the booming, bulletin board-style social network.

The latest round brought to $764 million the total amount of funding raised and gave Pinterest an overall value of $5 billion.

Uses for the money were to include paying for technology and talent to develop Pinterest into a “discovery platform” in a potential challenge to Internet search king Google.

In a move similar to one made last year by Facebook, Pinterest is tapping into its rich trove of user-posted content to tackle questions that traditional search engines such as Google or Bing handle less well.

There are more than 750 million online bulletin boards with a combined total of about 30 billion Pins by people sharing images on myriad interests from travel to food to sports and more, according to Pinterest.

Pinterest has become one of the Internet's hottest young websites, particularly among women, by giving people virtual bulletin boards that they personally curate with pictures showcasing interests in anything from food to sports, fashion or travel.