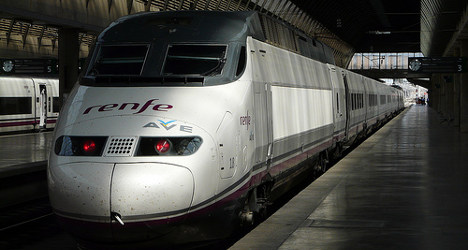 Train services across Spain will be seriously affected by the 46-hour strike which is set to end at 11pm on Friday.

The strike will see around one in four high-speed 'Ave' and long-distance trains cancelled, Spain's public works ministry said on Monday.

For mid-distance regional services, around one in three trains won't be running.

Also affected will be local commuter trains (Cercanias) trains, with half of all trains cancelled except during peak hours — from 6am to 9am, 1.30pm to 3.30 pm and 6.30pm to 8.30pm — when services will run at 75 percent of capacity.

In Catalonia, services and schedules for regional commuter trains (Rodalies) will be slightly different. In the region, two thirds of all trains will be cancelled except in peak hours when 66 percent of services will be running. Peak hours in Catalonia will be 6am to 9.30am and 5pm to 8.30pm.

Bus companies have announced they will lay on extra services during the planned railway strike.

Workers with Spain's national railway company Renfe and rail infrastructure company Adif have called the two-day strike to protest against a lack of personnel.

"The (public works) ministry has said the number of high-speed (Ave) passengers will double by 2015 from 26 million to 50 million," a spokesperson with Spain's CCOO general workers union," told national daily El País.

"Instead of increasing staff numbers, they are telling us it's necessary to cut them," he added.