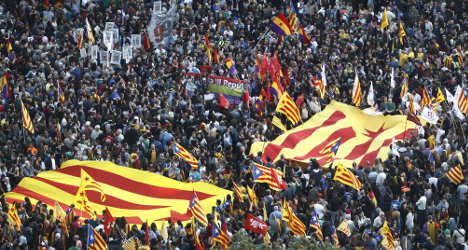 Supporters of independence for Catalonia and Republicans celebrates the Spanish King Juan Carlos abdication during a demonstration at Plaza Catalunya in Barcelona on June 2nd. Photo: Quique García/AFP

The head of the Catalan regional government, Artur Mas will hold talks on Wednesday with Prime Minister Mariano Rajoy, who fiercely opposes plans by the Spanish region to hold an independence referendum in November.

The meeting in Madrid is widely seen as a last-ditch attempt to avoid a head-on constitutional clash between the national government and the wealthy northeastern region. It gets underway at 11am.

Artur Mas, who has headed the Catalan government since 2010, began pushing for the referendum after he failed to clinch a better financial pact from the central government for Catalonia in 2012.

He upped the ante in December when he set November 9 as the date for the poll — two months after Scotland votes on independence from Britain in a referendum authorized by the British government.

"I know there is a problem and we must face it," he said on July 12th when asked about the conflict with Mas over the referendum.

"We are going to talk but I am not going to do what I can't and should not do," he added.

Mas points to polls that show a large majority of Catalans backing his planned referendum to argue it should be allowed to go ahead.

However, a new poll released on Wednesday shows that 62 percent of Spaniards would favour Madrid negotiating the cancellation of the planned November poll and carrying out immediate constitutional reforms that would see Catalonia remain as part of Spain.

Support for this idea is almost equal among voters for Spain's ruling conservative Popular Party (64 percent) and the main opposition socialist party, the PSOE (67 percent), according to the poll of 600 people carried out by Spain's El País newspaper.

There has been growing pressure from Spain's business community for Spain's politicians to come up with a so-called 'third-way' on the issue of Catalan independence to break the deadlock between leaders in Barcelona and Madrid.

Meanwhile, the new leader of the PSOE, Pedro Sánchez — also opposed to the independence vote in Catalonia — announced recently the party would back a 'federal' solution to the Catalonia crisis, granting more power to the countries 17 autonomous regions.

Spain is currently made up of 17 autonomous regions with wide ranging powers, although the extent of this power differs between regions.

Only two regions have full power of their own finances — Navarre and the Basque Country.

The region, which has its own language and distinctive culture, blends a powerful financial services sector with a strong industrial base ranging from textiles and automobile manufacturing to biotechnology.

The 1992 Olympics, in part financed by the national government, helped transform the Catalan capital, Barcelona, into one of Europe's most visited cities.

"Not only do we have to talk about the right to decide and the consultation, but also of numerous other subjects that affect Catalans, in economic areas, social affairs, infrastructure and other subjects of vital interest," Mas said last week when asked about his upcoming meeting with Rajoy.

The two questions planned to be posed in the referendum are: "Do you think that Catalonia should be a state?" and, if the answer is yes: "Do you want that state to be independent?"

Support for independence itself was about 45 percent in April, according to the regional government's most recent polling. That compares with about 20 percent in October 2010 before Mas took office.

Backing for independence is lower when Catalans are asked of they would still favour breaking away from the rest of Spain if this meant the region would have to leave the European Union.

Both the European Union and NATO have warned that Catalonia would be excluded if it broke away from Spain.

The secession movement was dealt a potential blow on Friday when Jordi Pujol, Catalonia´s elder statesman and a leading advocate of its independence from Spain, issued a statement saying his family had hidden money in offshore accounts for over three decades.

Pujol, 84, who headed the regional government of Catalonia from 1980 to 2003, had previously denied media reports of having Swiss or other undeclared accounts.

Mas on Tuesday announced that Pujol would be stripped of his pension, office, official car and other perks.

"This will not condition the events of the coming months," he said in a reference to the referendum.