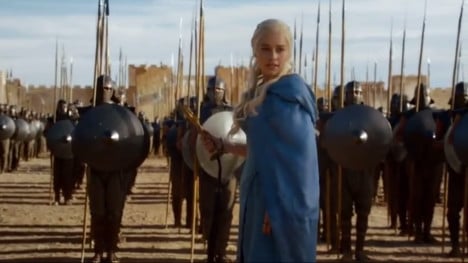 The scammers set up a phone number which kept hundreds of callers on hold for at least six minutes while they were unknowingly being overcharged. Photo: YouTube

Soon after HBO producers announced they would be filming scenes from Season Five of Game of Thrones in the Spanish city of Seville and the neighbouring town of Osuna, a group of scammers saw a chance for ‘the perfect con’.

Malaga-based production company Fresco Film were charged by the show’s producers with finding extras to feature in the Spain-based shoots.

They set up an email, [email protected], receiving a phenomenal 10,000 applications in just 24 hours.

Meanwhile, on the holiday island of Ibiza, a Game of Thrones-themed website was set up with the very same name as Fresco Film’s contact email: castingjuegodetronos.com.

It featured a number for budding extras to call in order to ‘apply’, keeping callers on hold for at least six minutes while they were unknowingly being billed at an exceedingly high phone rate.

All they got at the end of their wait was an automated message providing them with the valid email to apply to, Spanish daily El Mundo reported.

After Spanish consumer rights organization FACUA were informed by the duped applicants in early July, Spanish police began to hunt down the scammers.

On Tuesday, officers on the Balearic island arrested four men who ran or were closely involved in the phone scam company.