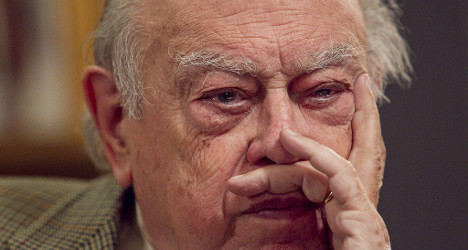 Three of Jordi Pujol's sons are also under investigation for corruption and influence-trafficking, including Oriol Pujol, the only one of his offspring to enter politics. Photo: Quique García/AFP

Jordi Pujol, 84, who headed the regional government of Catalonia from 1980 to 2003, will abandon politics and "give up everything", the current head of the regional Catalan government, Artur Mas, told a news conference.

Pujol will also lose his pension, office, official car and chauffeur, Mas added, as well as his position as founding chairman of the nationalist Convergence party, the largest force in Catalonia's ruling Convergence and Union alliance.

"He is aware of the damage created" by the scandal and wants it to have "as little impact as possible" on the "situation of the country at this delicate time", Mas said.

Pujol's fall comes as the Catalan government plans to hold a referendum on independence from Spain on November 9th, putting it at odds with the national government which insists the move is illegal.

"This will not condition the events of the coming months," Mas said, in reference to the referendum.

Pujol issued a statement Friday saying his family had hidden money in offshore accounts for over three decades, having previously denied media reports of having Swiss or other undeclared accounts.

He did not say how much money he had hidden abroad to avoid tax but Catalan daily newspaper La Vanguardia reported that four million euros ($5.4 million) was kept in a bank account in the principality of Andorra, a tiny landlocked nation wedged between France and Spain.

Three of Pujol's sons are also under investigation for corruption and influence-trafficking, including Oriol Pujol, the only one of his offspring to enter politics.

Political analyst Josep Ramoneda said Pujol clan's legal woes are not coincidental and are linked to the shift by the veteran leader and his Convergence party in favour of independence for Catalonia.

"Once the control escapes from him and Mas begins the independence project, Pujol lost his protection," he added.