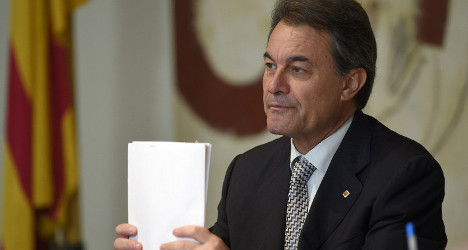 Catalan President Artur Mas made the comments during a press conference after a more than two-hour meeting with Spanish Prime Minister Mariano Rajoy — their first face-to-face encounter in nearly a year.

The encounter was seen by many as a chance to break the political deadlock over the thorny issue of a push for independence for Catalonia.

During the meeting, Spain's prime minister repeated his message that a planned vote on the issue of independence for the region will not go ahead.

Artur Mas, who has headed the Catalan government since 2010, has called for a November 9th referendum to test popular support in the region for the idea of independence from the rest of Spain.

However, Mas insisted on Wednesday he wanted the vote to go ahead.

"I told him that we are absolutely determined, as I told him a year ago, to hold the consultation," Mas said.

"We have the determination and the political strength, but we would like to hold (the vote) in a legal manner and with the backing of the State, British-style," he said, in reference to an upcoming vote in the UK on the issue of independence for Scotland.

"This is still not possible yet but we will keep trying. We don't have an agreement but the climate of dialogue is now open," the Catalan leader added.

Support for independence itself was about 45 percent in April, according to the regional government's most recent poll. That compares with about 20 percent in October 2010 before Mas took office.