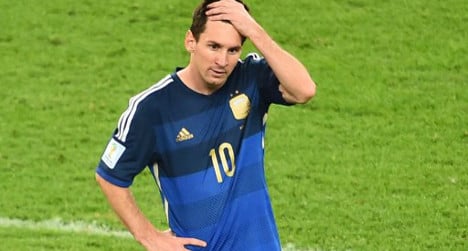 Despite the court case, Messi continues to lead advertising campaigns for brands like Adidas and video games maker EA Sports.

The Barcelona forward and his father, Jorge Horacio Messi, were accused last year of not paying €4.16 million ($5.58 million) in tax on earnings from the player's image rights from 2007-2009 through the creation of a web of shell companies in Belize and Uruguay.

Both Messi and his father denied wrongdoing and pointed the finger instead at a former agent of the player when they were quizzed at a court in Gava, the Barcelona suburb where the player lives, in September 2013.

Based on the Messis' testimony, public prosecutors called for the case to be shelved but the court on Monday ruled that Messi "could have known and consented" to the tax fraud and the prosecution of the case should go ahead.

Messi is the fourth richest sportsperson in the world, according to a ranking published in June by Forbes business magazine.

He moved up to fourth from 10th place in just a year with an annual income of just under $65 million, it said.

Despite the court case, Messi continues to lead advertising campaigns for brands like Adidas and video games maker EA Sports.