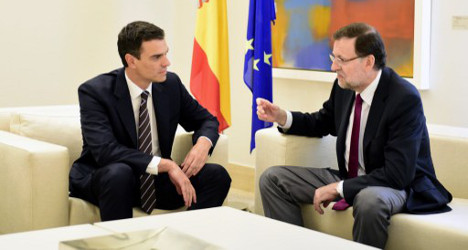 Pedro Sanchez proposed the measure during his first talks with Prime Minister Mariano Rajoy since he was ratified as the leader of the Socialists during a weekend party congress.

Spain is currently made up of 17 autonomous regions with wide ranging powers, although the extent of this power differs between regions.

Only two regions have full power of their own finances — Navarre and the Basque Country.

But Sánchez has called for changes that would lead to greater power for the regions.

"The Socialists are in favour of a federal Spain and that this constitutional reform be put to a vote before all Spaniards," he told a news conference following the meeting with Rajoy.

"I think it is the only solution possible, not only for the territorial conflict in Catalonia, but also as an urgent need for the entire country."

The regional Catalan government plans to hold a non-binding referendum on independence from Spain on November 9th, defying the national government's insistence that such a plebiscite is illegal.

Sanchez said he agreed with the government's position, as did his predecessor at the helm of the Socialists, Alfredo Pérez Rubalcaba.

Rubalcaba stepped down in May after the Socialists suffered their worst-ever election showing in a European Parliament vote.

A peaceful independence movement has gathered pace in recent months in Spain's northern Basque region, which is home to just over two million people, partly inspired by plans to hold independence votes in Catalonia and Scotland.