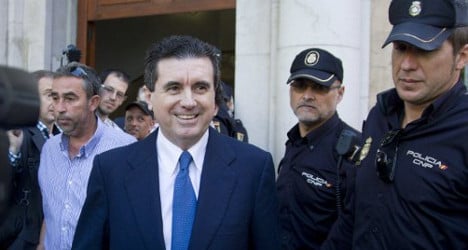 Former President of the Balearic Islands regional government Jaume Matas, in Palma de Mallorca in 2012, during the trial of the Palma Arena affair. Photo: Jaime Reina/AFP

Jaume Matas, a former environment minister in the government of José María Aznar from 2000 to 2003, was handed the sentence after being found guilty of influence peddling and is already in prison in the Spanish city of Segovia.

A court in Palma de Mallorca found Matas, also the President of the Balearic Islands on two occasions, guilty of drawing up illegal contracts for his speechwriter Antonio Alemany, a former journalist with Spain's El Mundo.

The jail term is the second sentence Matas has received in relation to a a long-running corruption investigation in Majorca known as the Palma Arena case, Spain's 20 minutos newspaper reported.

He is still being investigated over claims his party ran a secret party slush fund and that he is responsible for alleged over billing for works on the hugely expensive Palma Arena sports ground.

A minister with Spain's socialist PSOE party, José Barrionuevo, received a three-month sentence in 1998 for his role in kidnapping Frenchwoman Segundo Marey .