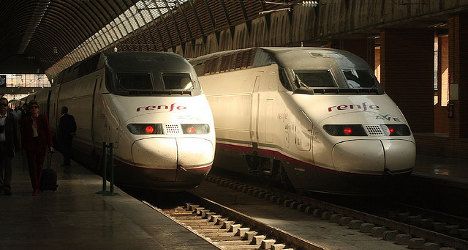 The strike will see around one in four high-speed 'Ave' and long-distance trains cancelled, Spain's public works ministry said on Monday.

For mid-distance regional services, around one in three trains won't be running.

Also affected will be local commuter trains (Cercanias) trains, with half of all trains cancelled except during peak hours when services will run at 70 percent of capacity.

Workers with Spain's national railway company Renfe and rail infrastructure company Adif have called the two-day strike to protest against a lack of personnel.

Bus companies have announced they will lay on extra services during the planned railway strike.

Renfe says that passengers who have already brought tickets for journeys on the dates affected will not be entitled to a refund as the company is not liable in cases where services are cancelled because of strikes.

Spanish consumer organization, the OCU, argues however, that under EU law, travel companies can't include contract clauses exempting them from liability in the event of a delay or cancellation of a service,

The OCU says passengers should keep receipts in case they decide to demand a refund.