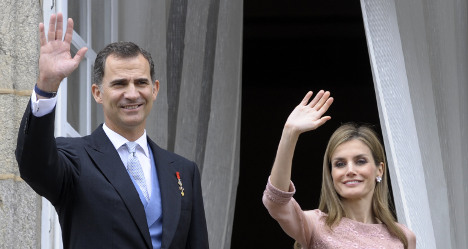 Spain's King Felipe and Queen Letizia during recent celebrations for St James' Day in the Spanish city of Santiago de Compostela. Photo: Miguel Riopa/AFP
Spain’s 46-year-old king made the announcement on Monday as part of a broader set of measures aimed at improving how the Royal House operates.
From 2015, Spain's public service auditors will, for the first time, go through the royal accounts with a fine tooth comb, Spain's ABC newspaper reported.
The move is part of Felipe's efforts of modernize the monarchy, according to the Royal Palace.
Felipe was proclaimed Spain's new king in June after the surprise abdication of his father Juan Carlos. In his proclamation speech, the new king said he wanted to create a more transparent royal family.
Monday's announced changes also include a code of conduct for royal staff, and closer oversight of gifts received by the royal family.
Critically, the reforms will also prohibit members of the royal family — King Felipe, Queen Letizia, their daughters Leonor and Sofia, and former King Juan Carlos and his wife Sofia —from working for private companies.
Such a move should mean that Spain's royal family does not again find itself embroiled in the type of scandal affecting Felipe's sister Cristina.
Cristina is suspecting of having knowingly benefiting from suspect business dealings by her husband, Inaki Urdangarin, who is accused of embezzlement of €6 million ($8 million) from a charitable sports institute — a scandal that has seriously dented the popularity of Spain's royals.
If Cristina does appear in court, it will be the first time a member of Spain's royal family has faced charges in court.
Spain's new king has also said the king's household will in future had its own specially dedicated legal team.
Sources within the Royal Palace told Spain's El País newspaper this had nothing to do with the case involving Cristina, and the lawyers involved would only deal with matters affecting the king and queen and their two daughters.
"The Royal Palace is going to be more open, and is going to ask for more expert opinions. We are going to improvise a little," the institution said on Monday.