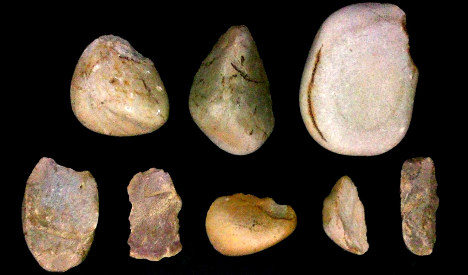 The tools were left behind by the first humans who settled in the Iberian Peninsula, archaeologists Santiago David Domínguez and Míchel Muñoz told Spanish news agency Europa Press.

Most of the pieces discovered were hewn pieces of extremely hard quartzite known as 'choppers'‏, which were used to cut wood and meat by prehistoric humans including Homo Ergaster and Homo Antecessor.

The research was led by Ares Arqueologia, a company based in the province of Cuenca in Central Spain.

It started in 2012 as part of a large research project on the Palaeolithic Age, with research taking place at more than twenty other archaeological sites.

The finding “proves the importance of this part of la Meseta [high plains of central Spain] in the study of human origins” said expert Ignacio Ruiz de Lerma, in charge of the research program at the University of Murcia.

The research reveals crucial data for the study of early humans and has already resulted in a book and a documentary.