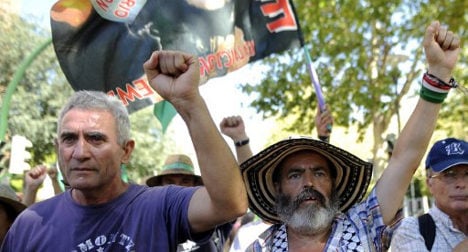 Cañamero (left) is known as “the right-hand man of Gordillo”, the village mayor of a “communist utopia” in Spain’s largely agricultural Andalusia region. Photo: Cristina Quicler/AFP

The radical anti-capitalist Andalusian Workers Union (SAT), with over 20,000 members, says it want to “reclaim” Gibraltar not just for Spain, but for Andalusia.

“Gibraltar is a well-known tax haven, that’s our main reason to occupy it in protest,” José Caballero, SAT secretary general, told The Local.

“We also want to reinstate Gibraltar’s Andalusian sovereignty, dismantle the British military base and protect small-scale fishing in those waters.”

Asked if they had planned how to carry out the invasion, Caballero responded: “We haven’t decided yet; we’re aware there’s a large security presence at the border but we’ll find a way round it.”

Cañamero is referred to in Spain’s ABC newspaper as “the right-hand man of Gordillo”, the village mayor of a “communist utopia” in Spain’s largely agricultural Andalusia region.

FIND OUT MORE: Who is Spain’s Robin Hood?

Together they’ve conducted numerous occupations of military terrain, protests against rich landowners and raids on supermarkets to collect food and school material for needy families in the region.