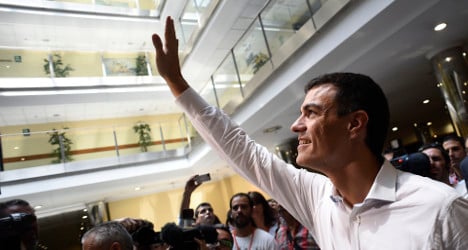 The new Secretary General of the Spanish Socialist Party (PSOE) Pedro Sanchez waves as he arrives to take part in the PSOE extraordinary congress in Madrid on Saturday. Photo: Pierre-Philippe Marcou/A

Pedro Sánchez, 42-year-old economist who was virtually unheard of only a few months ago, said Sapin was "exasperated, angry, hurt" after six years of "unprecedented" economic crisis during a speech to an extraordinary party congress in Madrid.

"We are standing up again to get Spain back on track," he said to the applause of some 3,000 party delegates at the congress during a 50-minute speech.

Sánchez won 49 percent of the votes cast by 130,000 party members in a primary held on July 13th, putting clear distance between himself and Basque lawmaker Eduardo Madina, who finished second with 36 percent.

The result of the primary was ratified on Saturday at the party´s extraordinary congress.

Sánchez replaces veteran politician Alfredo Perez Rubalcaba, 62, who stepped down in May after the Socialists suffered their worst-ever election showing in a European Parliament vote.

A tall married father of two nicknamed "El Guapo" or "The Handsome One", Sánchez has cast himself as a fresh face for the party and a credible challenger to the conservative Popular Party which ousted the Socialists from power in a crushing November 2011 election defeat.

The Socialists have struggled to overcome criticism of how their last government handled an economic crisis sparked by the collapse of a property boom in 2008 that has left one in four out of work.

In campaigning, Sánchez fought to fend off the challenge from Podemos, a leftist protest party that did well in the European polls.

In his speech on Sunday described by Spain's left-wing Público newspaper as "rather disjointed", Sánchez said that if the Socialists are swept back to power in 2015 they would scrap a labour law reform introduced by the ruling Popular Party that makes it cheaper and easier to fire workers.

He also pushed for a federal Spain as the solution to the Catalonia crisis, which has seen that region's leaders push for a November 9th poll on the issue of independence for the rest of Spain.

Sánchez went on to say the PSOE would roll back controversial abortion reform if the government "is capable of" bringing it in.

In January, the government approved a controversial draft reform which will allow abortions only in cases of rape reported to the police or when there is a medically-certified threat to the mother's physical or psychological health.  They have now modified this to include cases where the foetus is deformed.

However, no date has been set for the final approval of this bill.

Sánchez has a master's degree in politics and economics from a Belgian university. He served as a top aide to the head of a UN high representative during the war in Kosovo.

He has since served on and off as a non-elected regional deputy in Madrid.