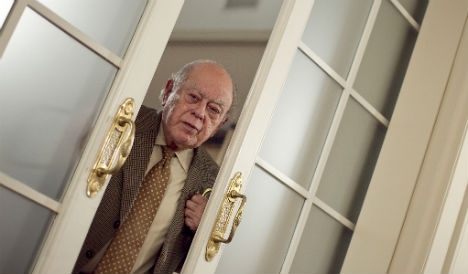 Former President of Catalonia Jordi Pujol poses during an interview with AFP in Barcelona on May 26, 2014. AFP Photo/Quique Garcia

In a statement Jordi Pujol, who headed the regional government of Catalonia from 1980 to 2003, said his father left an undisclosed amount of money which he stored outside of Spain to his wife and seven children on his death in September 1980.

"In recent days members of my family have regularised this inheritance," he added.

"I am the only one responsible for these actions and their consequences and I want to express this publicly as well as my willingness to appear before tax authorities, or if needed, judical authorities, to explain these facts and stop insinuations."

Before the last regional elections held in Catalonia in November 2012, centre-right daily newspaper El Mundo published a police report whose origins were unknown that claimed that Pujol and his family had bank accounts in Switzerland.

The police report cited by the newspaper said the current head of the Catalan regional government, Artur Mas, also had Swiss bank accounts.

The banks cited by the newspaper denied the report.

Pujol, 83, was one of the founders in 1974 of the nationalist Convergence and Union coalition which is currently in power in Catalonia in north-east Spain.

His revelation that his family secretly kept money abroad for over three decades comes as the Catalan government plans to hold a referendum on independence from Spain on November 9, putting it at odds with the national government which insists such a move is illegal.

Pujol said the "mistake" of keeping the inherited money abroad had "directly contaminated" his seven children and his wife and asked for forgiveness.

"I expose all of this with much pain for what it means for me and my family, but most of all for what it can mean to many people of good will who may feel that their trust has been broken, who I ask for forgiveness," Pujol said.

"It is necessary that the origin of the funds, as well as their evolution over the past 30 years, be cleared up," said Enric Millo, the spokesman for the the Catalan branch of Spain's ruling conservative Popular Party.

The CiU and its leaders had long argued that reports that Pujol's family held money abroad were "defamation campaigns" so "it would not be too much to ask that they apologize to Catalans now", he added.

For his part Mas said Pujol's revelation "was a personal matter".

"It has nothing to do with the party or the government," he added.