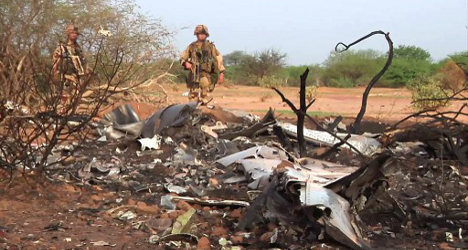 "We think that this plane crashed for reasons pertaining to meteorological conditions," he said on France's RTL radio.

The wreckage of a Spanish-owned Air Algérie plane missing with at least 116 people on board has been found in Mali's Gossi region, not far from the Burkina Faso border, the French president's office said on Friday. A statement issued by the presidency confirmed earlier reports from Burkina Faso.

Last year, France sent troops to Mali to free it from the grip of Islamists after rebels captured large swathes of the desert country's territory.

Despite international military intervention still under way, the situation remains unstable in northern Mali, which was seized by jihadist groups for several months in 2012.

On July 17th, the Bamako government and armed groups from northern Mali launched tough talks in Algiers aimed at securing an elusive peace deal, and with parts of the country still mired in conflict.A "French military unit has been sent to (the area) to secure the site and gather evidence.

President Francois Hollande previously expressed his solidarity with the families and friends of the victims, among them the Spanish pilot and crew, and some 50 French nationals.

Three of the Spanish crew were from Madrid, two were from Majorca and one was from the Basque Country, according to Spanish national broadcaster RTVE.

Air Algerie said flight AH5017 left Ouagadougou, the capital of Burkina Faso, with more than 110 passengers and a crew of six for Algiers overnight Wednesday.

Radar contact with the McDonnell Douglas 83 was lost 50 minutes into the flight, a little after the pilots said they were diverting from the route due to severe weather.

The plane was leased to Air Algerie by Spanish company Swiftair, a Madrid-based aviation company which offers cargo and passenger flights in Europe, North Africa and the Middle East. Founded in 1986, they currently have a fleet of 45 planes.

They operate charter flights for airlines including Iberia, Vueling and Air Europa.

Scenes on Thursday at the head office of the company with just 464 employees were described as chaotic by Spain's El País newspaper.

The daily said the paper was not responding on a phone line set up for victims of the air tragedy and had lined its windows with cardboard to deter onlookers.

The Air Algerie jet leased from the firm that went missing on Thursday was checked "two or three days ago" and was "in good condition", France's aviation watchdog said.

The Spanish public works ministry has set up an emergency committee to deal with the crisis, while the foreign affairs ministry is mobilizing its diplomatic staff in West Africa.