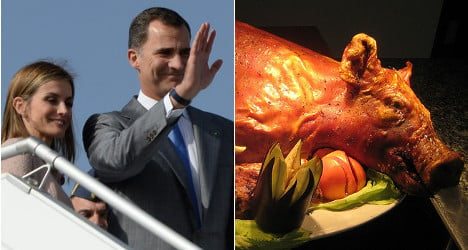 The Spanish government’s daily Congressional Record (BOE) reported the news on Friday, highlighting that the annual budget will go from €65,000 to €133,000.

Based on previous spending, the sum is likely to be even higher than that. It usually is.

In 2012, Spain’s Defence Department used €342,693 of taxpayers’ money to pay the yearly bill, much more than was initially stipulated.

So what’s on this pricy menu?

IF YOU THOUGHT THOSE SPANISH MENU TRANSLATIONS WERE BAD, CHECK OUT THESE SHOCKERS

Some price limits for food products have been set; whether Spain’s Defence Ministry sticks to these constraints depends largely on whether they make the final invoice public (2013’s hasn’t been released yet).

Although Spain’s new king and queen are understandably likely to travel abroad to make the acquaintance of other world leaders, their exorbitant plane food budget goes against their attempts at portraying a new low-key image of the royal family.