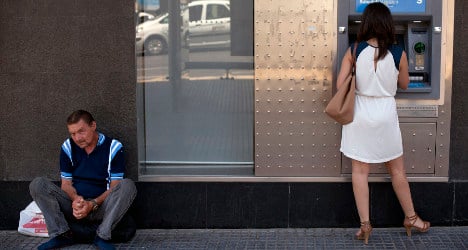 Many Spaniards are not yet feeling the benefits of improvements at the macroeconomic level. Photo: Jorge Guerrero/AFP

Forty-six percent of Spaniards think Spain has still not hit rock bottom on the jobs front, according to the latest Eurobarometer poll from the EU.

It's a result which shows many Spaniards are not yet feeling the benefits of improvements at the macroeconomic level.

The Spanish government announced recently that the country's economy grew by 0.5 percent in the first quarter of 2014  —  the fastest rate in six years.

In further good news, unemployment also dipped by 1.4 percent in the same period but remains at a very high 24.47 percent.

But the Spanish figure of 46 percent for people who believe the worst is yet to come on jobs is still down 6 percent on the result clocked up by the country in the Autumn 2013 Eurobarometer.

The better number is also in line with a general upsurge in jobs-related optimism across the EU.

In autumn 2013, 53 percent of people across the 28-country bloc said they thought the job situation was going to worsen, while this is now 44 percent.

The greatest level of pessimism is in France where 60 percent of people don't believe there will be imminent improvement in the labour market.

Most positive are the Danes: just 18 percent of people in Denmark think the job situation is going to get worse.