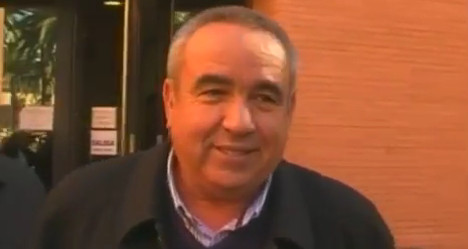 Angel Fenoll was found guilty of 11 tax crimes, each accounting for three years behind bars.

The rags-to-riches businessman headed two waste management companies which, with the help of favours and concessions awarded by local politicians, quickly became a monopoly in Spain’s Valencia region.

Behind closed doors, the man from Orihuela (Alicante) was also heading an invoice-forging ring to fool Spain’s Inland Revenue out of more than €2 million ($2.7 million) between 2002 and 2004.

Fourteen other suspects who helped Fenoll create the fictitious bills have been handed two and half year jail sentences.

Although all of the people found guilty can appeal the sentence, the judge’s ruling still comes across as rather strict when compared to those handed to cold-blooded killers in recent years in Spain.

The maximum sentence for murder in Spain currently stands at 25 years.

As Spanish online daily La Información reported, the man who killed US English teacher Laura Cerna and dumped her chopped-up body in a Seville river was sentenced to 19 years in prison in 2012.

There was also the case of a reoffending member of Basque separatist group Eta who recently received 30 years and six months for shooting a soldier in the back of the head.

These contrasting sentences for very different crimes offer further insight into why many Spaniards have lost faith in the county’s justice system.

A recent TV advert by Spain’s Inland Revenue titled “We all pay for the tax you evade” showcases how the government is looking to crack down on fraudsters, despite the numerous fiscal crimes many of its party members have been found guilty of in recent years.