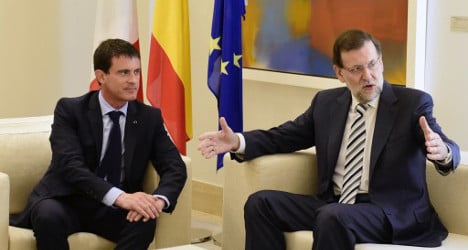 “You can’t break up a state without there being consequences,” were the words used by Valls to express his concerns over the effects Catalonia’s independence bid could have on Spain and the EU if it were successful.

Valls, who speaks better Catalan than he does Spanish, met with Spanish Prime Minister Mariano Rajoy on Wednesday in Madrid’s presidential palace of La Moncloa.

Despite representing opposing political factions, both leaders agreed it was “essential” to push for reforms which instigate further growth in the EU, especially with regard to crisis-hit Spain and France.

“France wants a strong Spain,” Valls told Rajoy while emphasizing the financial difficulties that could arise if Catalonia’s bid for a referendum did end up in an independent state.

“(It could be) very dangerous for Catalonia, Spain and also the EU.”

The Catalan born leader, grandson of a newspaper editor who sheltered persecuted priests during Spain’s Civil War, isn’t the first EU leader to express his views on the Catalonia issue.