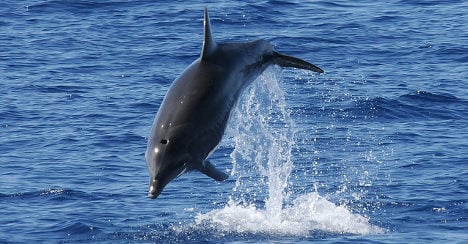 The WWF is pushing for the creation of a sanctuary for whales and dolphins near the Canary Islands, home to nearly a third of the cetacean species on the planet. Photo: Joachim S. Müller/Flickr

More than 9,000 people have signed an online petition calling for the whale sanctuary's creation since the World Wild Fund (WWF) launched its online campaign on Tuesday.

"These zones are internationally recognized for being home to nearly a third of the cetacean species on the planet," said the international environmental group in a statement.

"The abundance and diversity of species found in this unique area in the Atlantic makes it the most important enclave for whales and dolphins in the EU."

The organisation wants Spanish Prime Minister Mariano Rajoy to kill off oil and gas prospecting plans near the coasts of the Canary Islands.

WWF also calls for the end of naval military manoeuvres near the Canary Islands and the modification of maritime routes to avoid vessel-whale collisions.

On Tuesday Antonio Brufau, head of Repsol – Spain’s biggest Spanish oil and gas company – announced that oil-prospection off the coasts of the Canary Islands would begin in October.

Repsol had received the green light from the government in May, a move environmental groups described as "unjustifiable”.

Several organisations pointed out the potential negative impact on tourism, the island’s vital source of revenue.

The country couldn't "afford the luxury" of not drilling for oil and gas off the coast of the Canary Islands, the country's Industry Minister José Manuel Soria had said on Tuesday.

The minister said it would be “ridiculous” if Morocco were to find gas, oil or both in the shared waters around the southerly Canary Islands before Spain did.

He also highlighted that the unemployment rate in the archipelago stands at a worrying 33 percent, 8 percent higher than the national average.