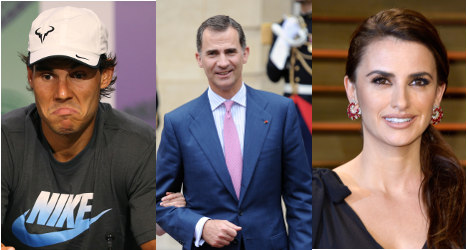 Rafael Nadal, the winner of 14 Grand Slam tennis titles, has topped the celebrity rankings put together by Personality Media.

The current tennis world number two beat out other contenders to take the title of Spain's most-respected and best-known celebrities in a poll of 40,000 Spaniards.

But it's not only sports stars that got a look in.

In third place was the Spanish actor and comedian Paco León, who gained extra notoriety after he kept his promise to post a naked photo of himself on Twitter if he managed to rack up one million followers.

Also making the grade was the television personality and public crusader Jordi Évole, who caused a stir in 2013 when he produced a fake documentary about one of the key events in recent Spanish history — the failed 1981 coup that threatened to topple the country's young democracy.

The only woman on the Personality Media list was the actress Carmen Machi who starred in the surprise Spanish movie hit Spanish Affair (Ocho apellidos vascos).

Dropping out of the top ten for the first time in five years was the goalkeeper with the Spanish national team Iker Casillas who had a disastrous World Cup in Brazil.