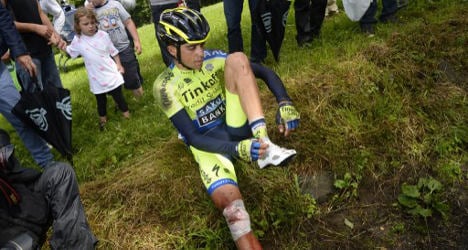 Spain's Alberto Contador sits after a fall during the tenth stage of the 101st edition of the Tour de France cycling race on July 14th. Photo: Lionel Bonaventure/AFP

Contador quit the Tour de France, which he had been bidding to win for a third time, after suffering a fractured shinbone on the tough 10th stage.

"Bad day today. The healing of the wound is getting complicated… Goodbye to the Vuelta," Contador wrote in Spanish and English on Twitter.

Bad day,the wound healing gets complicated,I've no date to take the bike.Goodbye to the Vuelta.

The 31-year-old crashed badly on a descent during the mountainous stage from Mulhouse to La Planche des Belles Filles.

He did not need surgery on his fractured tibia, and in a second tweet thanked doctors in Madrid's Cemtro Clinic for their treatment.