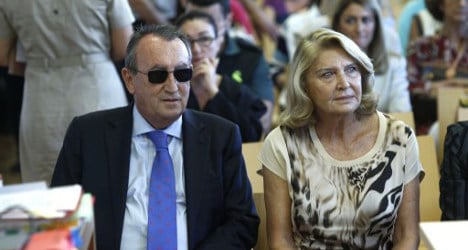 Ex-president of the council and the PP of Castellon Carlos Fabra (L), flanked by his ex-wife Amparo Fernandez at the Castellon provincial court in October 2013. File photo: Domenech Castello/Pool/AFP

Fabra, the former president of the conservative Popular Party in Castellón province was cleared of charges of influence peddling and blackmail in the November 2013 trial.

He was, however, sentenced to four years in prison after he and his ex-wife were found to have €3.2 million ($4.1 million) in unexplained earnings from 1999 to 2004, Spain's El Mundo newspaper reported.

Fabra was also found guilty of failing to pay €1 million in tax.

The 68-year-old appealed the four-year sentence but the Supreme Court's decision on Wednesday to reject that appeal, ending what has been a decade-long legal saga.

READ ALSO: Is this Spain's shadiest character? The Local's profile of Carlos Fabra

In that time, eight judges investigated the 68-year-old financial dealings, with none of them previously able to make charges stick.

Fabra is said to have ruled Castellón province like his own private fiefdom and is the man behind the white elephant that is Castellón airport, which cost €150 million ($200 million), but which has yet to receive a single flight.

The former politician — who always wears sunglasses because of a childhood accident which left him one-eyed — also claims to have won the lottery seven times in the last ten years. Those wins bagged him €2.2 million, he said.

But some experts argue fake lottery winnings are a convenient way to launder money.