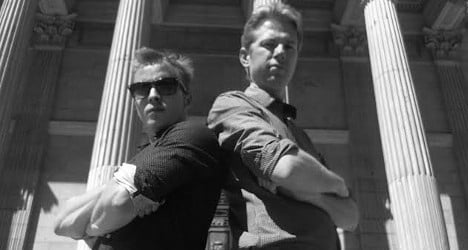 Should I stay or should I go? The Local's Alex Dunham (left) and George Mills don't see eye to eye on the issue of spending summer in the city.

Come July, Madrid empties out as locals flee the heat and the concrete for the coasts and countryside. The Local's Alex Dunham thinks getting out of the city is the only way to survive August, while his colleague George Mills believes the city is at its absolute best at this time of year.

Who do you side with? Dunham or Mills?

Anyone who can, leaves Madrid in summer right? Only the poor, the sick and the stupid stay put and swelter through the dog days of summer.

That's what I used to think, but no more: last year I stayed in Madrid and realized I'd been getting it wrong all along.

Sure Madrid is stinking hot in July and August, and, yes, most of the people you know are away on some amazing holiday or other, but it turns out the positives of staying put far outweigh the downsides.

First up, you avoid the nightmare that is the Spanish Summer Holiday. Imagine: no with holiday traffic, no over-priced hotels, and — best  of all — no fighting over a tiny patch of overcrowded beach.

Then there are the simple joys of a nearly empty city. Fancy a seat on the metro? No problem. Want a window seat at your favourite café? You've got it.

After a few weeks without queues and crowds, you'll wish everyone would stay away. Forever.

And it turns out the few people who do actually stay in Madrid seem friendlier in summer. Perhaps it's just that everything is easier because there are less people around, but I also like to think there is a certain solidarity among the people who are 'left behind'.

In summer, people in Madrid take the time to talk to each other, even if its just to complain about the heat. No one's in a hurry because there's less work to do, and it's too hot anyway.

So don't feel embarrassed about not having booked a trip to the coast. Give in to your lazy inner self and enjoy the best time of year in the city.

If you haven’t heard this Spanish summer classic, let me quickly fill you in on what it’s about.

This 80s song title translates to “Well, well! No beach here!” and yes, it pays tribute to Madrid in the dreadful heat of the summer months.

So even before hedonism and holidays at the beach were in full swing in post-Franco Spain, spending August in the capital was already a massive, hot, sweltering drag for many ‘Madrileños’.

It is great having the city to ‘yourself’ but how can you enjoy it when temperatures hit 36 degrees at six in the evening?

Sleeping becomes a nightmare and finding a terraza in the shade is your number one priority when you meet friends.

That’s if you have any mates who are still knocking around! Most people take off for the whole month of August leaving some parts of the city looking like the set of a zombie movie and you feeling like Billy no-mates.

So if you can’t beat the city, leave the city!

It’s true hotels and restaurants put their prices up for the summer, so I guess planning ahead is key if you want to find a decent deal.

Equally as important is looking for an alternative to the popular holiday spots like Spain’s jam-packed playas. Rural house with a pool maybe?

Whatever you go for, you should know Madrid’s municipal pools are unlikely to be a source of no-frills relaxation.

They’re overflowing with families with screaming kids who may or may not treat the pool as a public urinal.

If you happen to have a pool in your building that’s great, otherwise don’t make do with using your bathtub as your only cooling down method; pack your bags and off you go!