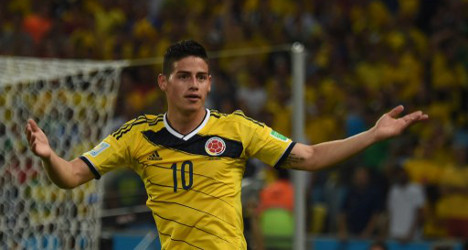 AS reported on Tuesday the Colombian star will be earning €7 million a year from his move to Real Madrid. Photo: Luis Acosta/AFP

James Rodríguez's spectacular volley against Uruguay was crowned the best goal of the World Cup on Monday as speculation mounted that he would soon be unveiled as Real Madrid's latest big money signing.

Spanish sports dailies Marca and AS said on Monday Real had agreed a deal worth between €75 and 80 million (US$100—$108 million) with the Colombian striker's French club Monaco and that he would play for the current Champions League winner for the next six years.

The signing has now been officially confirmed after the 23-year-old passed his medical on Tuesday morning.

He will be presented to fans at Real Madrid's Santiago Bernabéu stadium at 8pm on Tuesday, the club said in a statement

AS reported on Tuesday the Colombian star will be earning €7 million a year from the move.

Rodríguez became the hot property of the World Cup with his six goals that gave him the Golden Boot for the top scorer.

Even pop stars Rihanna and Shakira voiced their admiration of James Rodriguez on Twitter.

In a FIFA.com poll, his volley against Uruguay in the last 16 was declared goal of the tournament by more than four million voters — three quarters of those who took part.