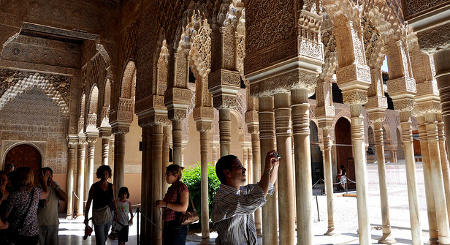 Tourists visiting the Alhambra in Granada, Andalusia. Photo: Camila Pastorelli/Flickr
The number of foreign visitors was up 7.3 percent over the figure for the same time in 2013, when the country set a new record for tourist arrivals, the tourism ministry said.
Tourism is a main pillar of Spain's economy, struggling to gain strength after a decade-long property boom collapsed in 2008, leaving one in four out of work.
Unrest in other countries popular with European tourists such as Egypt and Turkey has helped boost visitor numbers to Spain, the world's third most visited nation.
British holidaymakers topped the list, with 6.5 million visiting Spain during the first six months of the year, up 5.8 percent from a year earlier.
SEE ALSO: Spain's most beautiful villages — The Local guide
German tourist numbers rose 8.8 percent to 4.7 million while the number of French holidaying in Spain climbed 10.3 percent to 4.2 million.
The biggest draws were the Canary Islands, Catalonia and Andalusia.
Last year, Spain retook the number three spot in world tourism from China, luring a record 60.6 million international visitors, behind only France with 83 million and the United States with 67 million.
Tourism in 2012 accounted for 10.9 percent of Spanish economic output and 11.9 percent of the country's jobs. Spain has an unemployment rate of 25.93 percent.‏