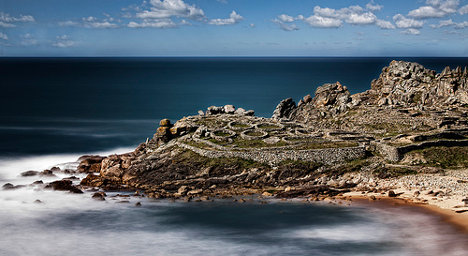 For centuries it has gone unnoticed, weathered by Galicia’s incessant drizzle but still visible to those with an eagle-eye.

On one of the granite walls of Santiago church in the small town of Betanzos, a small previously unintelligible inscription five metres above ground kept historians and epigraphists, or people who study ancient inscriptions, baffled for decades.

Researchers working for a private association called the Gaelaico Project now believe they've finally deciphered what it reads: "An Ghaltacht" or "Gaelic-speaking area".

"If our interpretation is right, the inscription isn't related to religious matters, but rather to the language that was spoken in Galicia at the time," Proxecto Gaelaico head Martín Fernández Maceiras told local daily La Voz de Galicia.

"It seems logical that the inscription was made while the church was being built (in the 14th century)."

Up to now, Galicia, along with Asturias and northern Portugal, have been informally considered part of the ancient Celtic nations (Ireland, Scotland, Wales, Brittany, Isle of Man and Cornwall) due to cultural and historical reasons rather than because of written proof.

Although researchers are hoping to get a second opinion from expert epigraphists on whether the inscription does indeed read “Gaelic-speaking area”, the chances of it being the first written evidence of Galicia’s Celtic past are high.

Despite the dominance of Latin, there are plenty of Gaelic traits still present in Galicia,” James Duran, academic expert on minority languages at the US's Stanford University, told La Voz de Galicia. 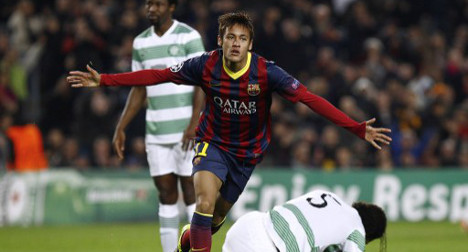 Barça coach Tata Martino haile Barça and Neymar's performace against Celtic as the best of the season so far . Photo: Quique García/AFP

Gerard Pique got the hosts off to the perfect start when he slammed home from close range after Celtic keeper Fraser Forster had done well to deny Alexis Sanchez.

Neymar then produced a magical piece of skill to ghost past Efe Ambrose to set up Pedro for the second and rounded off a fine team move with the simplest of finishes to make it 3-0 a minute before half-time.

The Brazilian striker then added a brilliant fourth with a curling finish after a one-two with Xavi before completing his hat-trick with an individual effort 10 minutes later.

Cristian Tello made it 6-0 with a deflected strike 18 minutes from time before Georgious Samaras pulled one back for the Scottish champions.

"I am very happy to score my first three goals in the Champions League, but the most important thing was that the team played well," he told Spanish TV station Canal Plus.

"We needed to change the dynamic after the recent defeats and now we have to concentrate on La Liga."

However, it was a bitterly disappointing evening for Celtic boss Neil Lennon as he suffered his heaviest defeat in over three years in charge.

"Barcelona were fantastic, but we were very poor and nowhere near our previous performances against them.

"There was no bravery on the ball, we started nervously and it seemed like the heads went down at 2-0. That's something I need to address.

"It is really tough to take. Barcelona are a very good side but we're better than that. I'm angry and disappointed."

Despite being already assured of a place in the last 16, Barca boss Gerardo Martino sent out the message that he didn't want a repeat of the lacklustre performance that saw his side beaten 2-1 by Ajax in their last Champions League outing as he named a strong side.

Barca were in front after just seven minutes as Pique coolly volleyed home his second goal of the season.

The La Liga leaders continued to swarm forward with ease as the half progressed and the only surprise was that it took until the 39th minute for them to double their advantage as Neymar skipped past Ambrose on the right side of the area before squaring for Pedro to slot home.

Neymar then scored his first Champions League goal just before the break as a lovely move involving Sanchez, Sergi Roberto and Martin Montoya found the later in behind the Celtic defence and he rolled the ball into Neymar's path to slot into an unguarded net.

The flurry of goals continued after the restart as Neymar got his second of the evening just three minutes into the second period with a precise finish into the top corner from 20 yards.

And the 21-year-old then embarrassed Ambrose once more as he nutmegged the Nigerian before rolling the ball past a helpless Forster.

Neymar ought to have had his fourth of the night 26 minutes from time when he rounded Forster only for Pedro to take the ball off his teammate and fire the ball of Van Dijk with the whole goal to aim at.

Substitute Tello did add a sixth as his shot from outside the area deflected in off a stray Celtic leg.

However, there was time for Celtic to salvage some pride as Samaras headed home Charlie Mulgrew's free-kick a minute from time.

In Wednesday night's other Champions League game featuring a Spanish club, Portuguese champions Porto were left to rue a number of missed opportunities as they bowed out of the top European competition with a 2-0 defeat away to Atletico Madrid.

The visitors struck the woodwork three times in the first-half and saw Atletico keeper Daniel Aranzubia save Josue's penalty as goals from Raul Garcia and Diego Costa saw the hosts maintain their unbeaten record in the Champions League this season.

"We have done very well in this first part of the competition," said Atletico boss Diego Simeone.

"Today we were clinical in the first-half, but we suffered a bit too with the chances that Porto had.

"I am very happy with the result because the team continues to be competitive."